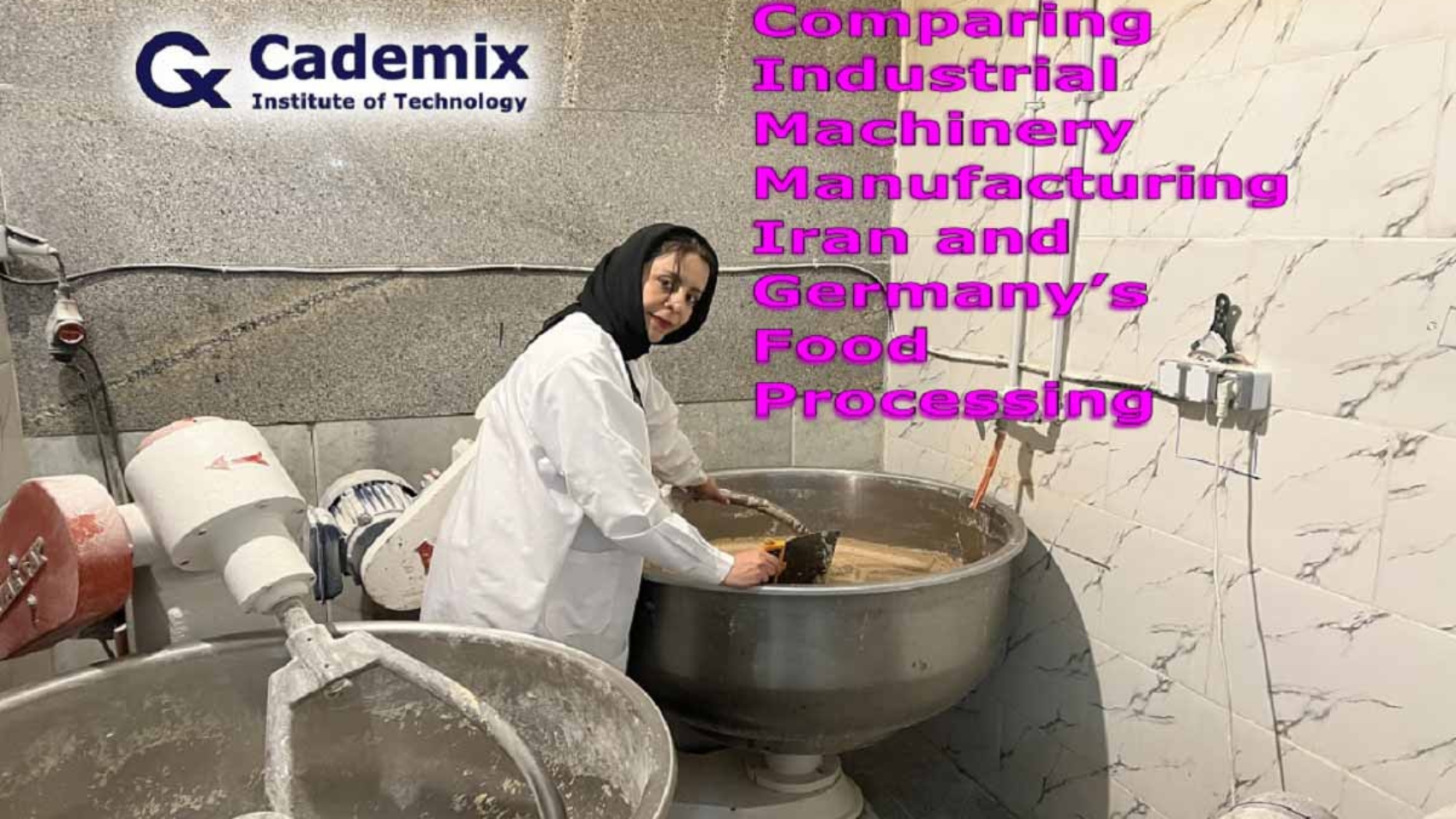 Comparing Iran’s Machinery Manufacturing with Germany is an important topic of discussion for making industrial developments. In this article, we discuss production facilities, that are among the most important indicators of a country’s industrial and production development.
Zahra Kamali, Cademix Institute of Technology.

Actually is, the state of industrial machinery and related sectors in a country can reveal a country’s economic status and can be considered as the most basic indicator of the country’s growth. Additionally, each country’s industry can be divided into 5 main categories.
These categories are textiles, petrochemicals, pharmaceuticals, machinery and electric appliances manufacturing, as well as food processing and industrial. Comparing the ratio between the exports and imports in these five industries reveals each country’s economic status.

As a result, many countries with production-based economies are still in their early stages of development. Iran, however, is progressing from this stage to the second one, and therefore, a more advanced stage of development.
Germany, on the other hand, is in the third stage of economic development, which is the stage of Innovation.

It is important to note that during the early stages of development, the country’s economy is typically affected by various other elements as well, such as the shortage of skilled labor and scarcity of natural resources. However, when income rises and other prices remain stable, countries are challenged to develop more efficient production methods and improve the quality of their products.
Consequently, Iran received a score of 6.48% in the 2015 Competition Report based on a weighted average of related elements, while Germany received a score of 50%. This demonstrates Germany’s ability to transform into an industrial powerhouse through the use of cutting-edge technology and knowledge .

In Germany, especially in the machinery and electric appliances manufacturing, industries are organizing around three axes: safety, quality, and speed, with customer satisfaction being one of the top priorities of German businesses. Also, other important factors of the machinery and electric appliances manufacturing industry that have elevated the country to rapidly grow and enter the Innovation stage are prioritizing quality, dynamism, innovation in public and private products, and pricing sensitivity.

When a country enters the third stage of development, it is capable of increasing and supporting higher wages and maintaining an adequate and enhanced standard of living. Meanwhile, by maintaining a high quality of life, businesses can also compete with new and distinctive items. Furthermore, countries must compete with the most advanced production and invention processes throughout the development period by developing newer and more innovative items. Iran obtained a score of 9.5% in the 2015 Competitiveness Report under the index of effective factors in innovation and progress, which is computed using a weighted average of related elements. Germany, on the other hand, achieved a score of 30%. These results demonstrate a significant disparity between the two countries in this regard.

As a result, “Industrial machinery” and “vehicles” have always been Germany’s biggest export hits to Iran. In 2020, German machinery and plant engineering again account for the largest share of exports, even though it has been severely affected by the US sanctions.

The machine-building industry is consider one of the infrastructure industries. It is also the most important indicator of a country’s industrial and production progress. The food processing and industrial sector is an extremely promising area in Iran. However, as previously stated, the value chain of this business in Iran is incomplete . It is also due to the importation of machinery.

This results in Iran’s trade balance in the food processing and industry machinery to be negative. Not to mention, the existing situation of this industry in Iran displays certain disadvantages for the country. Using outdated and inefficient technology, which is root in the lack of monetary investments in the sector; this mitigates Iran’s ability to compete in the market and or make up for the scarcity of high-quality machinery parts and equipment.
Another issue in Iranian food processing and industrial machinery is that even though it is mechanical and convenient, it has certain drawbacks; the most important one would be the machinery’s safety and security in comparison to German technology. For example, dough mixers and other mixers are almost always utilize without a protective barrier in Iran, whereas this type of machinery is design and utilize in Germany with a distinct elegance and a high level of safety.

The following section of the article focuses on bakery/bread, which is one of the main food industries in Iran and Germany , and it is very different in two countries. Bread is one of the main food items with large consumption in Iran. Almost in every street or small- town region you will find a bakery. Most Iranians are interested in traditional bread, however some bakeries use specific equipment to facilitate the production quantity.

Based on the a Financial Tribune report, Iran bread consumption size is six times larger than the global average. As per reports 199kg bread is average per capita annually in Iran and 70kg in Germany. In addition, Iran produces 15 million tons of bread yearly. Germany’s bread industries are very large with automatic systems and machines, which
is totally different from traditional Iranian bread that is baked by hand and in old ovens. Indeed, less than 20% of Iran’s bakeries are supporting by industrial bread production lines and 80% are still being back by hands.

300 Bread Types in Germany vs. 4 Major types in Iran

Viewing the above, only 12% of Iran’s market cached by industrial breads and 2% of the flour of Iran is used by industrial bread factories only. This is because, the Iranians are more interested in traditional breads. As far as we know, the Germans have developed a lot in the bread industry. Especially the Germany has a variety of bread and pastry products that according to media reports in Germany bake more than 300 types of bread and sweets. The variety of industrial bread products in Germany and even in Iran is the difference with traditional Iranian bread.
Traditional bakeries are able to bake one type of bread only, while an industrial bread production line is able to bake different types of bread.

Iran on the other hand has four major traditional bread. These are first Lavash, second Barbari, third Sangak and forth Taftoon. The read may use these names to get further information and insights about these types, however we are available to provide further details.

Every country’s machine-building industry, including Iran’s, should be a matter of national priority. In addition, a special letter with proper timing and budget estimation should be issues. until the determine making this industry a more influential sector in Iran’s economy. Also, support domestic manufacturing. In addition eliminating unnecessary and wasteful imports, and not selecting foreign exchange, the industry can definitely be improving.

Zahra Kamali is a professional Food-tech Entrepreneur with Bachelor Degree in Cooking. And Bakery from the Iran University of Applied Science. She has about 15 years of experience as a professional Chef. And Registered and Licensed Healthy Food Manufacturer in Iran (Has the mark I.R.l.FDO/Health code151245). She is a entrepreneur and founder of the Trademark “Menipest”, founded in Mashhad, Iran. Her target groups were the rural areas in Baluchistan/Iran (away from City and Villages). Her first article is about Rural Entrepreneurship . Other article comes out of her youre personal experience in the field of SDG – Personal Experience . She is also a member of Cademix Career Autopilot program – the acceleration program, and open to new opportunities. Please feel free to contact her: