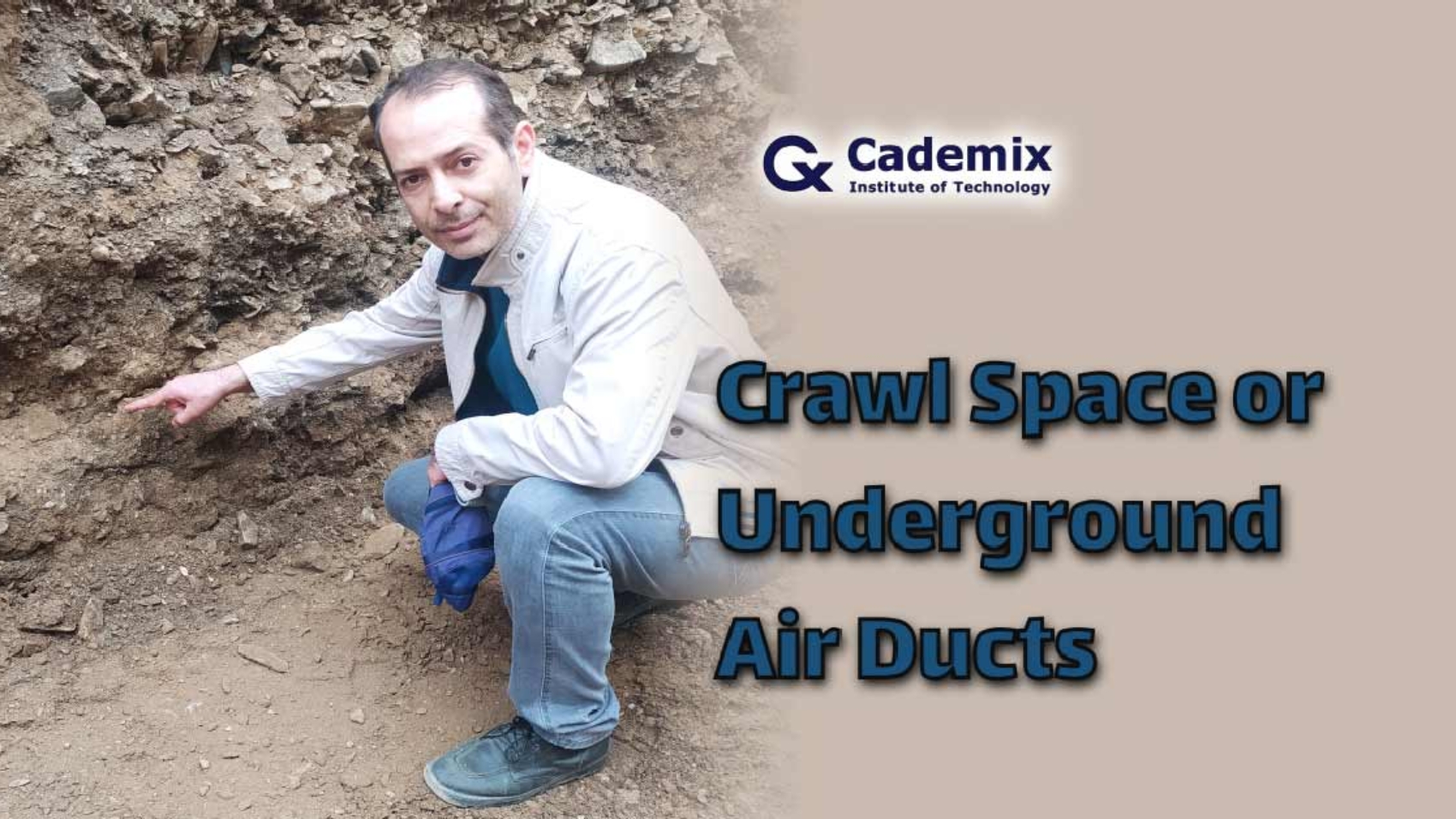 Crawl Space or Underground Air Duct ? Which one is better ? In this article we introduce a way to remove moisture from walls and floors, without the use of electricity. Further we discuss the import question what is the best to remove moisture?
By: Mohammadreza Beizaee, Cademix Institute of Technology


Moisture in constructions and crawl space :

From ancient times, humans began to build houses. They were building a house to achieve more peace and comfort as well as to be safe from animal attacks. Early humans built their houses near rivers because they needed water and their lives depended on water. However, the most important issue in the construction of these houses was the proximity or distance to the water . also how to prevent the attack of animals and people.

They did not Know the air duct and crawl space.
Being close to water causes the soil to be damp. They build houses and shelters on wet soil .

Thus the wall that is built on this wet soil is like a wick that is placed in oil , for instance .

And this wick always directs the oil up from the tank.

From the past, it has been tried to build the walls of the building in such a way as to prevent water and moisture from penetrating into the building,

because moisture causes irreparable damage to the building.

These walls direct moisture from the ground upwards, causing the walls to always be wet,

and this moisture on the wall eventually turns into mold and mildew.
Early humans had no way to prevent this, and the walls continued to raise humidity. They were unaware of the insulation materials. Because they did not know crawl space and air duct.

The moisture of these walls and floors were covered with stone so that the moisture would not be seen. But this method was not sustainable and the smell of damp was still in those houses. These humid areas are a good place for fungi, mice and insects to live. These endanger human health. Humidity causes bad smells in the building .

– Secondly maybe problem is the humidity of the building from rainwater.

Crawl spaces were built to provide a buffer between the house and its inhabitants and the damp, wet earth below. This seemed to make sense for many decades, especially since they were also a convenient place to put utility cables and ductwork used to circulate conditioned air throughout the house.

Today, however, we understand that a crawl space, instead of serving as a buffer, actually collects water and serves as a repository for humid air. This humid environment introduces a number of hazards, including mold and mildew growth, musty odors, and moist sills and framing that can lead to both structural damage and pest infestations.

However , Air duct is the best way .

Remove moisture from the wall and floor : (with air duct)

Today, with the advancement of science and technology, architects have tried to use the best techniques and materials to build a house so that they can build strong and beautiful houses, but over time, even the best houses undergo changes that need to be addressed and Repair of various parts. In addition the location of the house is also very important.

A house that is always exposed to direct sunlight or is built in a completely humid area. If the walls can not conduct heat, moisture and water vapor, the walls are falling apart. The air duct , helps us the walls of a building must have sufficient resistance to weather conditions.

The way of transferring water from the ground to the wall and to the floor of the house must be cut off. This path must be blocked by waterproofing materials.But the problem is that these walls and floors have been built and we do not want to demolish and rebuild this whole building.

There are many old and historic buildings around the world that are being damaged by moisture. And we want these buildings to be preserved so that they can be preserved for future generations.

So is there a way to keep these places ? Yes there is.

If a new building is to be built, we place layers of waterproof material on the floor or behind the walls to keep moisture out of the wall.

But we have a way that has been used for de-humidification in some areas for centuries.

The air duct is small, like the narrow paths that the cat way .

The cat way is an old technique that directs moisture from under the building to the outside of the building. Today , we have coordinated this old technique with the new technology and better results have been obtained. But what is this technique and how does it work? This technique, called cat way, is based on the laws of physics. If there is a fluid in an environment that also has a difference in temperature and a difference in altitude, that fluid will start to move. So , cat way is the same as Air duct and it is better than crawl space .

So if we can circulate the air below the floor of the building and around the roots of the walls . Then the moist air will come out of the floor and the walls and floor will start to dry. It is a fact that , crawl space is not suitable anymore.

Workers dig the wet soil to the required depth and take it out. We make bricks along the wall at the same depth (about 40 cm) so that a cat can move through those tunnels. Technicians build a network of this channel, which is made of bricks and without mortar, and at a depth of about 40 cm. These channels are all connected. We fill in this network and with stones , diameter of 2 to 7 cm. The underground air duct , moves the air .

The rocks do not allow moisture to reach the surface directly from the floor. From both places of this network, we put a PVC pipe.The height of these pipes is not the same. One end of the pipe is inside the tunnel and the other end is in the open.

The difference in height and the temperature between inside and outside will cause the air to move continuously.

Fresh air enters from one tube and moves inside the tubes, and moist air leaves the other tube. This constant movement of air prevents moisture from reaching the walls.

So without the use of electricity and suction or blowers, we were able to circulate the air. This is the law of physics that we used as green.

The vacuum created in the floor causes the suction and entry of dry and fresh air from outside . So we can get moisture from the floor and walls without consuming energy.

However In this way, in old buildings will be dehumidified and the neighborhoods will still be beautiful.

Mohammad Reza Beizaee is a civil engineer at the Cademix Institute of Technology (Austria).

He has a bachelor’s degree in civil engineering. Beizaee engineer has multidisciplinary skills in project management, supervising concrete, steel, wood and machine workshops.

So he uses several engineering software such as : AutoCAD, Revit، Solid and Photoshop in her projects.

And he has been a designer and executor of industrial projects and reconstruction of old buildings for more than 8 years. He is designer Air Duct . Researcher fellow crawl space . As a result also he has worked in large companies and the strength, beauty and timing , However of the project are very important to him.

I am ready to cooperate in your projects.
Beizaee.mohammadreza@Gmail.com
www.linkedin.com/in/beizaee-mohammadreza

Chemistry Lab Skills and Various Strategies for Developing Them
Mechanical and Lab Skills - Top 10 Skills for Every Lab Expert
From India to a Research Position in Berlin
Superabsorbent Polymer – A Review
The factors in the design process of a tiny house habitable and portable
Agricultural Education Policy in Germany
Arduino-Based Study on the Effect of Different Parameters on Cooling of Water
Success Story: Jackie Genbo Chen
3D rendering in the construction industry
Low cost & Portable MRI Systems - A step toward democratization of Health Care
3D Printing Business Overview by Javaid Butt
Repair a Concrete Floor