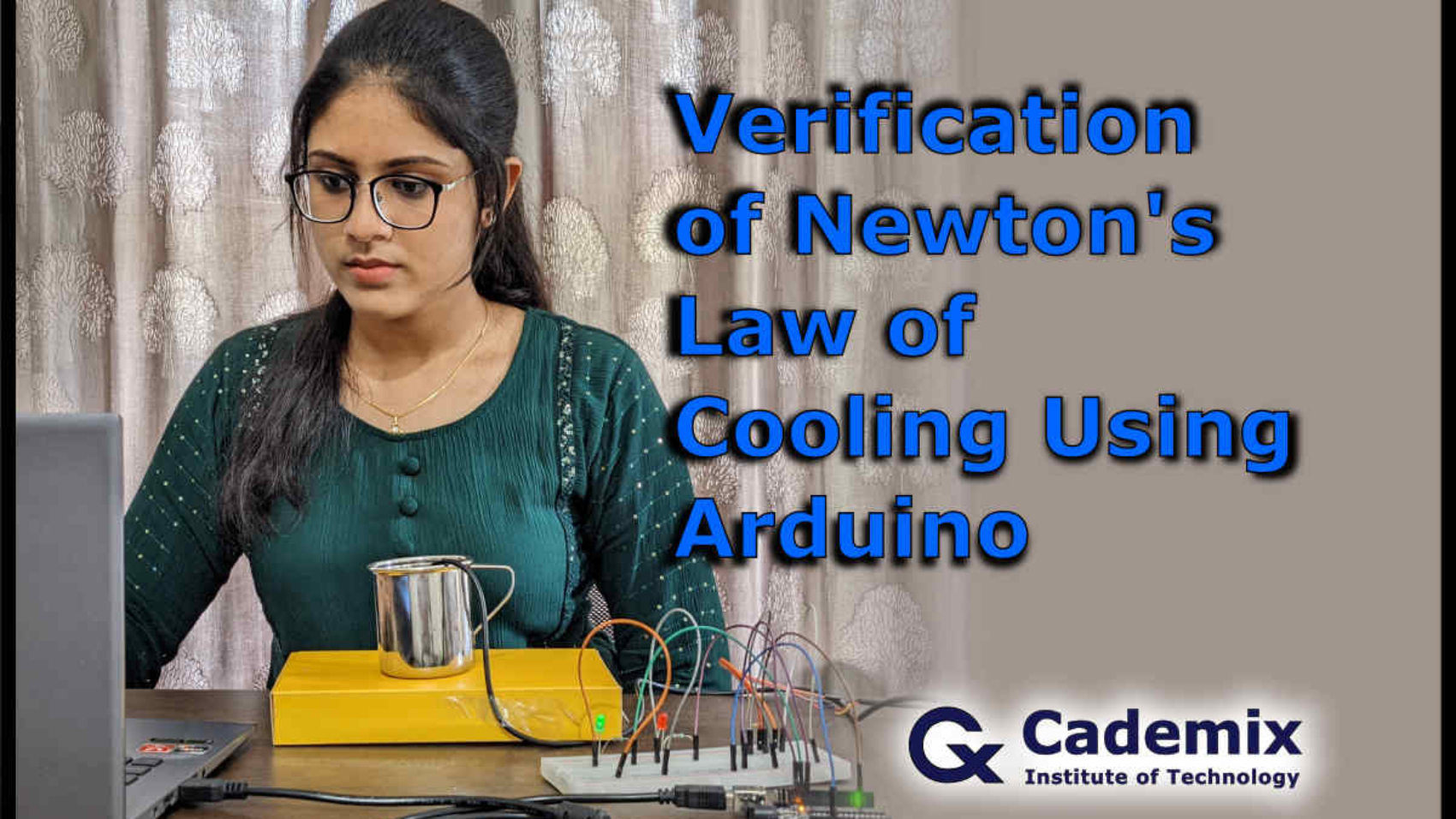 Arduino has already acquired wide appeal among both students and professionals. The main reason for this is the ease of usage and low cost of the Arduino. As a result, a huge number of projects have been done using arduino. This project is done as a part of Cademix Career Autopilot Program. Moreover, it is my first project using arduino. In this project, Newton’s law of cooling was verified using arduino uno and DS18B20 temperature sensor.

We all know that placing hot water or tea on a table causes it to gradually cool. It finally approaches the ambient temperature. In the 17th century, Isaac Newton developed his novel Law of Cooling. According to this law, the rate of cooling of a body is proportional to the temperature difference between the body and its surroundings. In numerous situations, Newton’s Law of Cooling can be used. Forensic scientists, for example, can use this law to find out the time of death of a person. They will measure the temperature of the body as well as the room temperatures. After that, they compute the cooling time using Newton’s Law of Cooling.

Where K is cooling constant. Furthermore, C is a constant which is equivalent to the difference in temperature of the body at t=0 and the surrounding temperature. As already mentioned, in this article you will see the verification of newton’s law of cooling using arduino. First of all, let us see the materials required for this project.

The circuit connections are exactly the same as shown in the schematic circuit design. It is fairly simple to connect the DS18B20 Temperature Sensor to the Arduino. Start by connecting red wire (VDD) of the sensor to the 5V out pin on the Arduino and black wire (GND) to ground. Then, connect the remaining digital signal pin DQ to arduino’s digital pin 2. You’ll also need to connect a pull-up resistor between the signal and power pins to make the data transfer steady. It is preferable to use a 4.7K ohm resistor for this purpose. If you don’t have one, a 10K ohm resistor would work. In fact, I used a 10K ohm resistor. These connections are enough for temperature monitoring.

However, in my project, I utilised a red LED and a green LED as an alert system. Connect the short leg (negative leg) of the red LED to the arduino’s ground. Connect the positive leg to digital pin 12. You can use any of the other digital pins and alter the code accordingly. You should put a resistor between the positive leg of the LED and the Arduino’s digital output pin. Its purpose is to prevent LEDs from burning due to high voltage. Similarly, connect the negative leg of the green LED to the Arduino’s ground and the positive leg to digital pin 13. Remember to include a resistor. I used a 220 ohm resistor. Let’s move on to the programming part.

A sketch is the name Arduino uses for programming. Before you begin programming, you should have two libraries installed: DallasTemperature.h and OneWire.h. The Dallas 1-Wire protocol is a little complicated. In order to cover this additional complexity, we’ll install the DallasTemperature.h library, which will allow us to give simple commands to obtain temperature values from the sensor. Moreover, Dallas Temperature is a hardware-specific library that handles lower-level functions. As a result, to communicate with any one-wire device, it must be associated with One Wire Library.

Given below is the sketch for this project. Along with the code you can see short comments starting with //. These comments will help you to understand the code. They are the explanations for the corresponding command. However, if you have any questions about the sketch or the project as a whole, feel free to contact me.

Firstly, IDE will give commands to include onewire and Dallas libraries. Then create the instances to communicate with the onewire device.

Next part of the code is the void setup. The commands that are given in this function will run only once. So, I have given a command to print “Temperature o C” only once.

Third function in the code is the void loop. As the name indicates, the code in this function will run over and over as long as the Arduino Board is turned on. Actually, this is the main part of the sketch. This function includes the code for temperature monitoring and printing.

The commands that are given so far are enough for temperature monitoring. But, you can see that I have not closed the void loop function with the curly bracket. It is because I’m including an if function to control the LEDs. More explanation about if function is given in the sketch and in the video.

The temperature of water was measured in degree celsius (oC). Initially, it was 83.5 oC and the room temperature was 26.25 oC. The water was cooled to 33 oC in 2890 seconds (48.167 minutes). Using these readings, a graph was plotted with time along x-axis and Tbody-Tsurr along y-axis. According to the previously described equation (2), this graph should be an exponential decay.

You can observe that the temperature drops rapidly at first, then slowly as the temperature difference (Tbody – Tsurr) decreases. Furthermore, the trendline equation is quite similar to equation (2). This is in agreement with Newton’s Law of Cooling. Similarly, according to Newton’s law of cooling, a graph between loge (Tbody – Tsurr) and time should be a straight line. In addition, it should have a negative slope. Let us check whether the plot is a straight line with negative slope or not.

Thus we got the plot of loge (Tbody – Tsurr) against time as a straight line with -0.0007 slope. Thus, Newton’s law of cooling is verified.

Comparison of Data Obtained From Graphs

Let us compare equation (1) and the equation for Graph 2.

We can see that the two equations are similar. Hence, we ontain the K value as 0.0007 and the c value as 3.9569. Similarly, we can also compare equation(2) and the equation for Graph 1.

These are also similar equations. Furthermore, comparing these equation gives the K value as 0.0007 and the C value as 52.293. Hence, we can see that the K value for both graphs is 0.0007.

Food Additives in Europe
3D Holography and its Proven Industrial Applications
Spare Parts Management in Refinery
Siemens Teamcenter PLM and Interconnection with SAP and CAD
Techniques for Characterisation of Polymeric Nanoparticles: A Review
Learning By Doing
Microscale 3D Printing: A Review
Rules to help you prepare for your next Zoom or Skype interview
Arduino-Based Study on the Effect of Different Parameters on Cooling of Water
FMEA Insights in Manufacturing Industry
Scrum in Pharma Industry and Agile Drug Development
Chemistry Lab Skills and Various Strategies for Developing Them