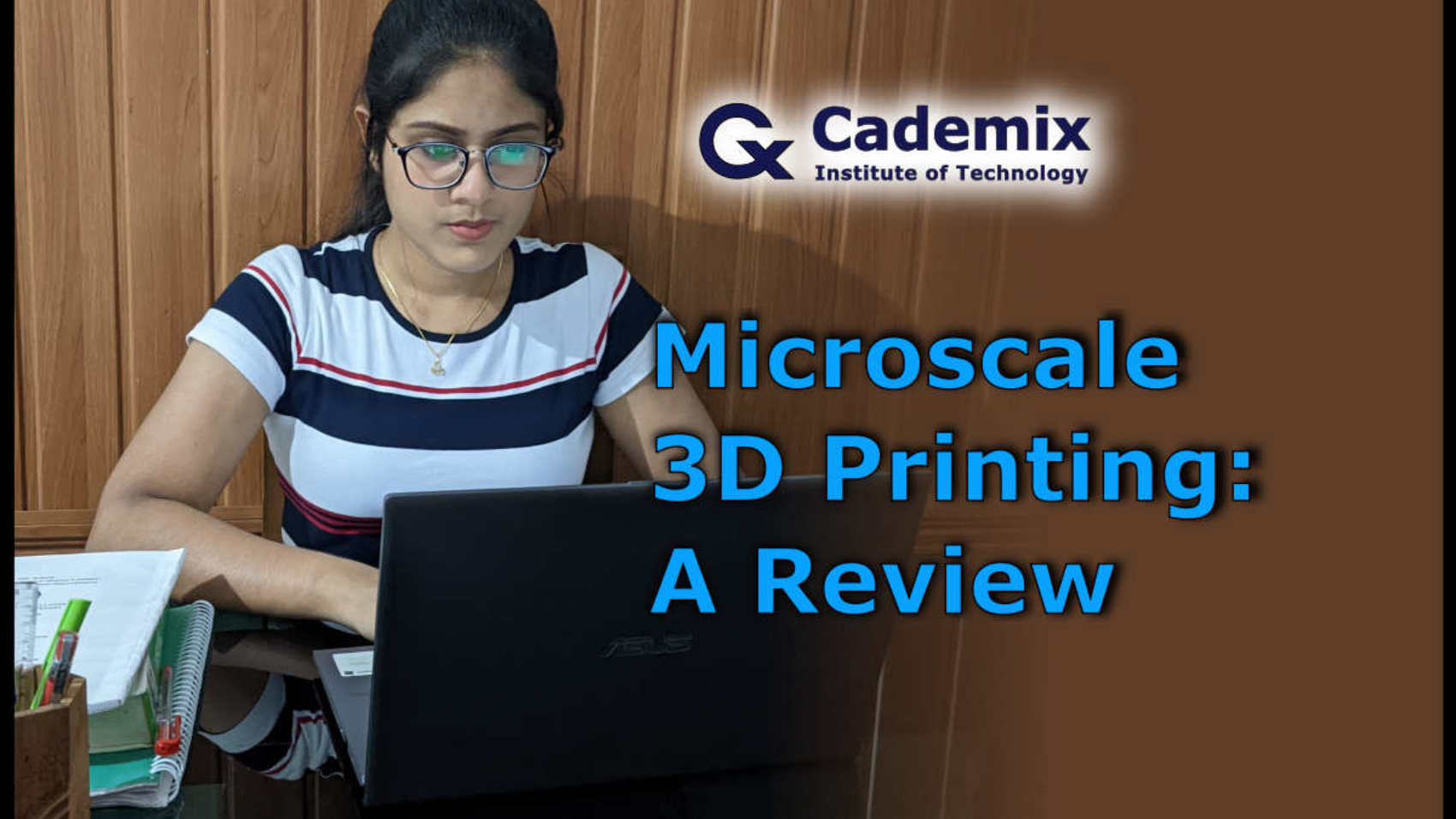 2D printing has helped in the quick reproduction of text and images, as well as the exchange of data. Printing has a huge impact on society, education, religion, and language all throughout the world. The transition from printing a picture on paper to printing an object out of some material took place in the early 1980s. This technology has become highly popular in almost every industry. Moreover, it has a wide range of applications in medicine, manufacturing, nanotechnology, industries and so on. Additive manufacturing is another term for 3D printing. It is, in fact, the production of a three-dimensional (3D) object from a model. This model might be a computer-aided design (CAD) model or a digital 3D model. Meanwhile, microscale 3D printing is becoming more popular. It is because there is a great demand for devices with microscale dimensions.

Firstly, we should get a model of the object to be printed. Modeling converts the thing you wish to print into a digital model that can be printed on a 3D printer. You may do this by using 3D modeling software (such as CAD software). This is comparable to the initial step in the building of a house. That is, making a 3d model for the house.

Slicing the model is the second step in 3D printing. It is done with the use of specialised slicing software. Slicing helps the 3D printer to compute the path and amount of filament needed when printing the object. It is similar to calculating the amount of materials required before building a house.

Once you have finished slicing, you may send the slice file to the printer. Then the instructions in the corresponding file will be used by the 3D printer to determine where and how the material is deposited. This is like building a house as per the plan.

Finishing is the final process in 3D printing. It is the process of applying the final touches to a printed item. It involves removing the object from the support, smoothening the surfaces, colouring, polishing, and so on.

What is Microscale 3D Printing?

Microscale 3D printing is the method of creating tiny objects with micrometre sizes or less. It is also known as micro additive manufacturing (µAM). It was originally used in the electronics sector to reduce the size of devices. For example, the first computer took up almost the size of a huge room. However, we can now say that we can carry a computer in our pocket. Computers have shrunk in size and cost significantly over the last few decades. This is largely due to the decrease in size of electronic devices. As a result, microscale 3D printing has a great importance in different sectors like biomedical, industrial, chemical, aerospace, electronics, communications and energy. The next part will go through some important micro 3D printing methods. Following that, we will have a look at some of the most important applications of micro 3D printing.

We know that there are a variety of 3D printing methods. Now let us see some of the important microscale 3D printing techniques and their working principle.

Stereolithography(SL) is one of the most popular 3D printing methods. It involves the layer-by-layer fabrication of 3D objects by photoirradiation of liquid photocurable materials. This method belongs to the vat polymerization family. In fact, µSL is based on conventional SL. It involves irradiation of a UV laser beam on the surface of a UV-curable liquid photopolymer. As a result of this, the polymer will solidify. When compared to traditional SL, the laser spot has a smaller diameter (a few micrometres) in µSL. UV laser energy causes photopolymerization at the material’s surface by single photon absorption. As a result, stereolithography can only create 3D structures by a layer-by-layer manner. Moreover, µSL permits the fabrication of microparts with layer thicknesses ranging from 1 to 10 µm.

µSL technique can be classified into two main categories: Scanning µSL, and Projection µSL. This classification is on the basis of the light exposure method.

The scanning µSL solidifies the photopolymer in each layer point by point and line by line. The object will form on a platform. It is immersed in a vat of liquid polymer to a depth equal to the single layer thickness. After the formation of the first layer, the platform is submerged to a depth equivalent to the thickness of the following layer. This procedure will be continued till the fabrication is complete. Scanning the laser beam with mirrors and horizontal movement of the platform helps in maintaining the location of the laser beam on the photopolymer. Figure 2 (a) gives the schematic illustration of scanning micro stereolithography.

The first step is the slicing of the 3D model into a series of 2D digital patterns. These 2D patterns are then passed to the digital micro-mirror device (DMD) chip, which modulates the UV light that is focused on it. Then the shaped UV lights with the corresponding set 2D patterns pass through a reduction lens. These lens projects the 2D patterns with a decreased dimensions on the resin surface. As a result, the UV irradiation causes localised photo polymerization on the resin surface, resulting in the formation of a layer of the printed structure. Then translational phases lower the printing platform, while the UV projection prints the next layer. This procedure will be continued till the fabrication is complete. Figure 2 (b) gives the schematic illustration of projection micro stereolithography.

TPP technology and stereolithography are both based on the same mechanism. That is, light causes a chemical reaction that results in the polymerization of a photosensitive material. However, unlike other 3D printing methods, TPP microfabrication is initiated by a near-infrared femtosecond laser. It can create ultraprecise 3D microstructures with great resolution not only on the microscopic scale, but also on the nanoscale. TPP is a non-linear optical process that involves the simultaneous absorption of two photons in a photosensitive substance (photoresist). This technique induces polymerization by activating photo-initiators in the resist. These radicals polymerize the resist locally.

A laser source, beam direction system, in situ monitoring system, beam steering, and motion stage comprise the experimental setup. A lens focuses the femtosecond laser. The laser scanning path was accurately controlled by computer according to the pre-programmed structures until the fabrication of the whole 3D structure. Furthermore, the imaging system based on a charge coupling device (CCD) is suitable for optical correction as well as in-situ fabrication monitoring.

This technique is the most accurate among micro 3D printing techniques. It is useful in potential medical advancements like as tissue engineering and medical implants. Moreover, it has industrial applications such as micromechanics.

The laser-induced forward transfer (LIFT) of material is an effective process utilizing laser light for additive deposition of materials. The technique works by transferring a material from donor substrate to acceptor substrate using a laser pulse. It is a direct-writing technique.

Figure 3 depicts the major components of a conventional LIFT printing setup. A lens directs a laser beam to the contact between the donor substrate and the donor layer. The laser beam goes through the transparent substrate and a donor substance absorbs it. As a result, it undergoes local heating, resulting in the melting and evaporation of the donor material in a localised area. Then the melting front moves quickly toward the acceptor substrate. In fact, the driving force behind this movement is the vapor pressure between the melt and the substrate. Moreover, scanning the laser beam and/or shifting the donor and receiving substrates will help in depositing pixels in the appropriate places. The laser pulse energy and beam size at the donor layer can be used to regulate the amount of ink transferred.

Inkjet 3D printing builds 3D structures based on a computer model by the successive selective deposition of ink droplets onto a substrate. It includes nozzle-based techniques such as electrospinning, direct ink writing (DIW), and electrohydrodynamic printing (EHDP). DIW and EHDP stand out as the most promising for micro and nanoscale fabrication. In this section, we will go through the EHDP technique for microfabrication.

Microfabrication using inkjet printing is only possible by the reduction of the droplet volume. As a result, we have to reduce the nozzle diameter. But, it is prone to clogging by the particles suspended in the ink. However, electrohydrodynamic (EHD) inkjet printing is the best solution for this.

In EHD inkjet printing, the use of electric field decreases the droplet size. As shown in Figure 4 an electric voltage is applied between the nozzle of the printhead and the substrate. Thus the fluid in the droplet will get positively or negatively charged in accordance with the polarity. Eventually, as the applied voltage increases, charges collect at the top of the droplet. Finally, the semispherical meniscus deform into a conical shape known as a Taylor cone. It is due to the coulomb repulsion forces between ions and electrostatic attraction to the substrate. As a result, thin stream of fluid departs the droplet surface at a specific critical electric field. The resulting droplets or jets have a diameter many times smaller than the diameter of the nozzle.

Microextrusion 3D printing deposits ink components such as pastes, dispersions, polymeric solutions, and molten polymers layer by layer using a motile print nozzle and a computer (Figure 5). The print nozzle and cartridge in the dissolution-based extrusion printing technique may move in three dimensions in response to digital data from the computer.

In this method, the fabrication of 3D objects occurs on a fixed manufacturing platform through computer-controlled layer-by-layer deposition. Stabilization measures are generally necessary during and/or after 3D printing. In fact, this technique is ideal for 3D scaffolds and hydrogel materials. Moreover, using micro extrusion 3D printing we can create soft robots of moderate size. However, the minimum dimension of the produced structures is restricted by the resolution of this 3D printing process.

Highly targeted delivery tries to provide a larger dosage to a smaller location while decreasing systemic toxicity. This delivery is system is useful for regions of the body that are tough to reach and enclosed. Because of that they are difficult to approach via traditional techniques. However, micro/nanorobots and micro implants can help to solve this problem. In my previous article Nanorobots: A Tiny Robot for Diagnosis and Treatment, I have explained the various biomedical applications of nanorobots. The fabrication of micro/nanorobots is possible through 3D printing. In addition, microscale 3D printing has many other applications in pharmaceutics and in other sectors.