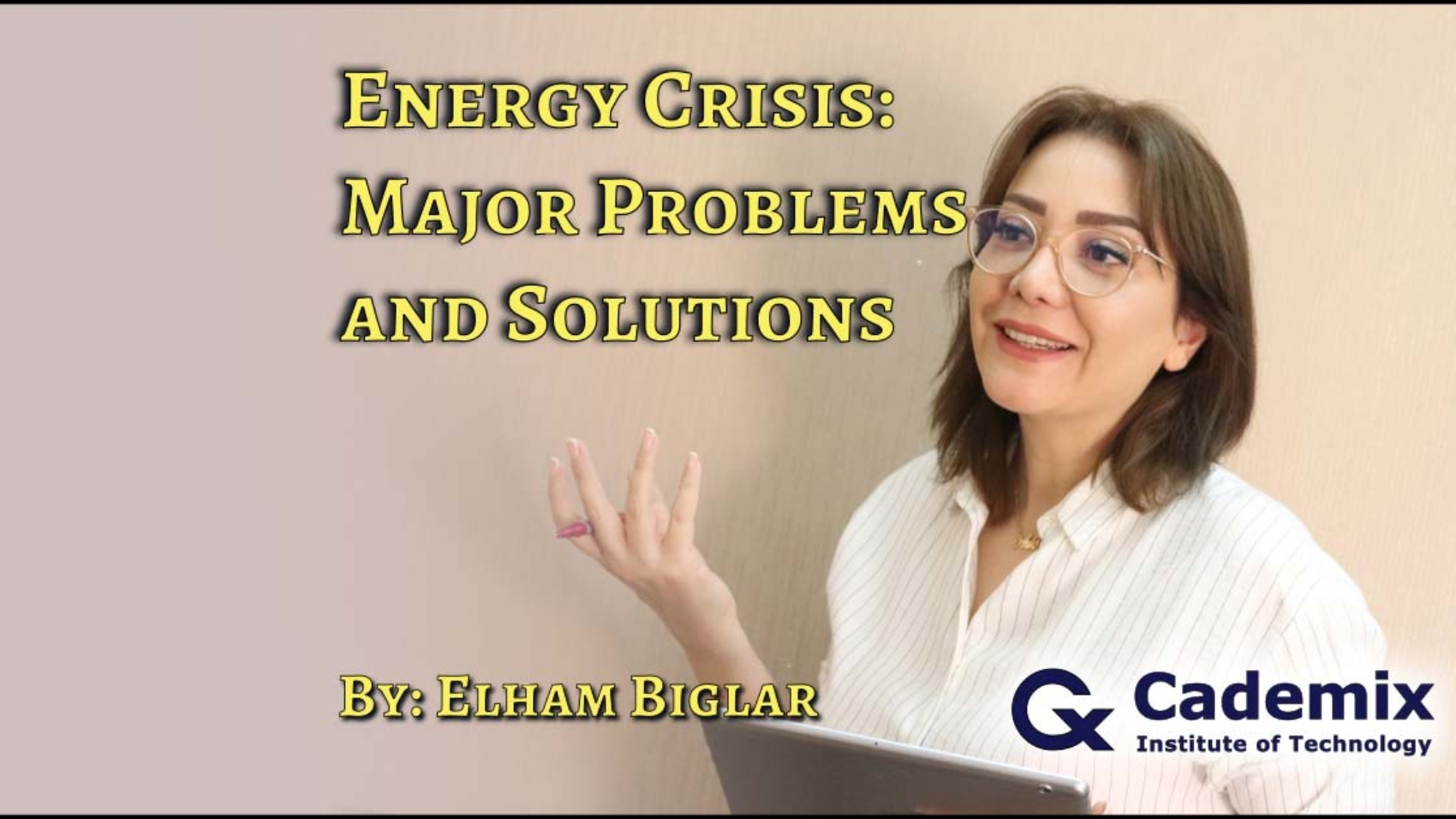 Our modern human civilization faces both a threat and an opportunity as a result of the global “energy crisis.” This is the time to accelerate the transition toward net zero. In this article, we will look at major problem and potential solutions related to energy crisis.
By Elham Biglar, Cademix Institute of Technology

Main Problem: We Still depend on Non-renewables

Primary energy sources include nuclear energy, fossil energy (such as oil, coal, and natural gas), and renewable energy sources such as wind, sun, geothermal, and hydropower. These main sources are turned to electricity, a secondary energy source that streams to your house and company via power lines and other transmission infrastructures. When we hear the term “fossil fuel” and “global warming”, most environmentally concerned people think of the images of smoggy air, oil spills, and melting ice caps. But, why do we still use fossil Fuels?

There are three key reasons why we continue to use fossil fuels, related to convenience, efficiency and their logistics. The main and foremost reason is the convenience. The fossil fuels are ready-made. While it took millions of years to convert trees and ferns into coal and natural gas, those millions of years have already gone. It is very convenient for us to now have nothing to do but burn them. This ultimately creates the problem of global warming and air pollution.

Another reason for using non-renewables, is because they are quite effective. People usually do not think of the energy crisis and very expensive energy storage technologies. Fossil fuels excel at their primary function, which is heat generation. It’s because they’re basically condensed energy reserves. Finally, the third reason is that their logistics are extremely simple. For at least the last two years, fossil fuels have been well-established. Some of the most technologically advanced elements in our modern supply chain, such as automobiles, still use fossil fuel.

Furthermore, the use of fossil fuels is triggering violent conflicts all over the world. Take a look at the natural resources of Iraq, Syria, Nigeria, South Sudan, Ukraine, and the East and South China Seas. In all of these regions, there are new or worsening conflicts. The basic point is straightforward. World powers want to control important oil and gas reserves and maintain long-standing conflicts. Control over oil and gas reserves is a critical component of national security in a fossil-fuel era. Russian – Ukraine war is another recent example, as both of them among the top suppliers in global food and energy supply chains.

There are multiple challenges on the way to practical implementation of the renewable energies. First, the solar power However sun is not also available every where. Central and north European countries are examples where global photovoltaic power potential are relatively low.

Anther challenge and enabler is the The cost of operating renewable and installation of nonrenewable energy sources. Two major factor are the Levelized cost of electricity (LCOE) and the Cost of Ownership (COO). Further challenge is the storage and Conversion to electricity.

When we analyze the energy sector closely, we can see how quickly it is changing and how this may affect future developments. Governments all around the globe are introducing laws to include sustainable energy sources and technology in order to make energy systems more efficient. Trends in the energy business may be divided into three categories:

Green hydrogen is a clean hydrogen from renewable energy sources. It will play a key role in a future carbon-free economy. The industry currently uses the liquid compressed hydrogen to transport and store hydrogen. We must store it at extremely high pressures (350-700 bar) or extremely low temperatures (-253°C). The lack of infrastructure and refueling networks for compressed hydrogen, as well as the necessity for specialized handling, are the two biggest barriers to a wider use of hydrogen in the transportation sector.

By chemically bonding hydrogen to a stable organic liquid carrier, Liquid Organic Hydrogen Carrier (LOHC) technologies provide an effective alternative solution, eliminating the need for compression and making hydrogen transportation safer, more practical, and cost-effective using existing conventional fuel networks.
Chemical reactions allow LOHCs to absorb and release hydrogen. We utilize a hydrogenation catalyst when hydrogen used into a liquid organic carrier. The industry stores the liquid substance and transport it to fueling stations by conventional ways at room temperature and pressure, making it safer and more cost-effective. Later, the end customers can use hydrogen-rich LOHCs to fuel FCEVs directly and quickly. Finally the cars or other devices can use a dehydrogenation catalyst to release the hydrogen onboard. We can now easily use FCEVs to fuell it like normal vehicles thanks to LOHCs.

LOHC technology has the potential to provide a significant advantage by using current gasoline and diesel fueling infrastructure. It will also allow for the delivery of hydrogen with large storage densities. However, the present catalyst technology for the dehydrogenation process is incompatible with the onboard application requirements of contemporary FCEVs. Within the framework of the Cademix Career Autopilot Programs we discuss this topic as a major focus and the required expertise related to the EU job market.

We can investigate the problem of energy crisis from various perspectives. Partly it is related to the convenience of the fossil fuels and partly related to the expenses of the renewables. In this article, we portrayed the major problems, alongside the main solutions including decentralization, digitization, decarbonizaiton and a potential solution to energy storage. In the next article we will discuss the more recent technologies, including power stations using Jet streams and tidal power stations used in offshore.

Elham Biglar is a graduate of Physics with several years of work experience in academia and industry. She was teaching university courses in the areas of physics, engineering, math, and multidisciplinary topics. Currently she is the head of the Cademix International Office; and one of the career advisors in the Cademix Institute of Technology. She helps the job-seekers toward their career success.